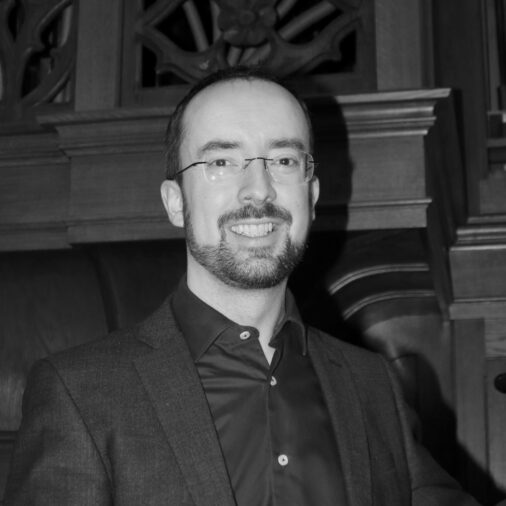 Composer, conductor and organist Alexander Flood read Music at Oxford, with John Caldwell and Guy Newbury, and attended the composition classes of Robert Sherlaw-Johnson and Robert Saxton. He held the organ scholarships of Jesus College, Oxford, and St Albans Cathedral, having studied with John Wellingham, at the summer school of the Norddeutsche Orgelakademie, and participated in masterclasses with Jacques van Oortmersson and Hans Davidson. He is a trustee of the John Wellingham Organ Studies Library in Oxford.

Postgraduate studies culminated in a Ph.D. in Composition from King’s College, London, supported by the Arts and Humanities Research Council. His supervisors were the Argentine composer Silvina Milstein, and Sir George Benjamin, pupil of Messiaen and Goehr. His music is known for its imaginative use of instruments and voices within a strong long-range harmonic framework. His works have won numerous awards and competitions, and have been performed by ensembles including Gemini, Lontano, Chinook, the Praetorius Choir, St Paul’s Cathedral Choir and the Brunel Sinfonia. His cantata Born in Flight was premiered in 2016 to great acclaim.

Alex now divides his time between performing, teaching, and composing. In addition to being Assistant Director of Music at St Peter’s Church, St Albans, he conducts Radlett Choral Society and Sandringham Community Choir. As an organist, he has recently played recitals in London, Oxford, St Albans, and Weingarten, Münster, Würzburg, Marburg, Heidelberg and Tübingen in Germany. He teaches conducting and lectures on Musical Grammar at the University of Chichester, teaches piano at Wycombe Abbey School, and has a thriving practice of private piano, organ, music theory and composition pupils.